The Bottle Cap Challenge Spins Across the Internet 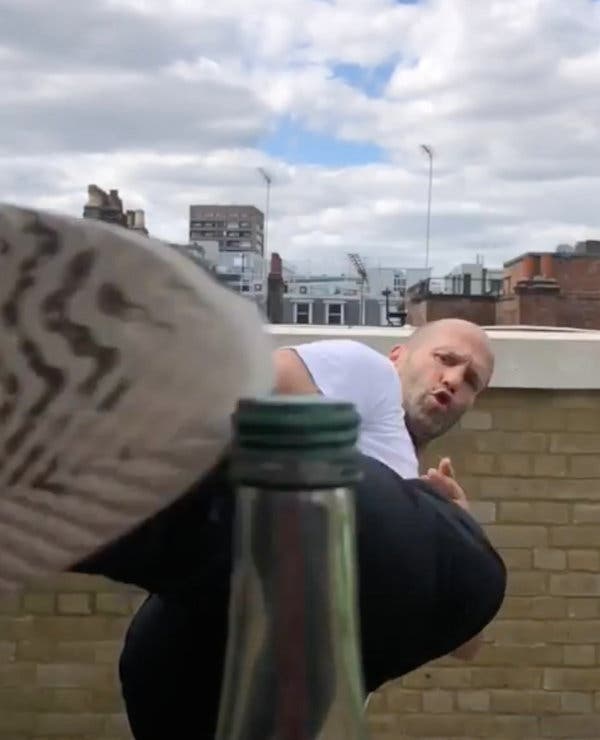 Why are people testing their kicking accuracy using bottle caps? Because they can. (Who knew?)

Jason Statham, the action-movie star known for his martial arts prowess, posted a video this week of himself kicking a bottle. Filmed in slow motion, it shows him spinning 360 degrees before his foot connects with the bottle cap just enough to send it flying off the bottle, but not enough to tip the bottle over. By Wednesday morning, this 23-second Instagram post had more than 14.5 million views.

Mr. Statham’s post on Monday was just one entry in a viral trend known as the Bottle Cap Challenge. More than 26,000 Instagram posts had the hashtag #bottlecapchallenge as of Wednesday morning.

Like most challenges that catch fire online, this one doesn’t require much to participate. All you need is a bottle, a cap, a camera and plenty of time to hone a skill that, while not exactly useful, is highly entertaining.

So, how exactly does this work?

It’s not the first bottle-related challenge to go viral, but this time participants have to do more than just flip the bottle.

The challenge is how to unscrew the cap with a roundhouse kick without knocking the bottle over. The trick, as you might have guessed, is to loosen the cap beforehand and have someone off-camera hold the bottle steady. Many people are posting their videos in slow motion, making the feat seem that much more impressive.

Whose idea was it?

The bottle-cap-kicking videos first circulated widely in mixed martial arts circles, but the origin of the challenge is unclear.

It may have started with Farabi Davletchin, a Kazakh Taekwondo champion, and some good-natured goading.

His hashtag didn’t catch on, but the challenge did.

How popular is this?

Errolson Hugh, a fashion designer, posted his own video with the hashtag #bottlecapchallenge. Within a week, more than a million people had watched it. Mr. Hugh then challenged Max Holloway, an Ultimate Fighting Championship featherweight champion.

Mr. Holloway soon shared his own video, which racked up more than two million views in four days. He also challenged his friend John Mayer, the famous musician.

Mr. Mayer challenged Mr. Statham — who had already been called out by Mr. Davletchin. Then Mr. McGregor, a mixed martial arts fighter and former U.F.C. champion, joined in.

In his caption, Mr. McGregor challenged Floyd Mayweather, a boxing legend. The two famously met in a 2017 boxing match that Mr. Mayweather won in the 10th round.

By Wednesday morning, Mr. Statham’s video had been viewed more than 14 million times and Mr. McGregor’s more than nine million.

Is it safe to try at home?

Yes, as long as you’re physically able to pull off a roundhouse kick. But it might not be a bad idea to stretch first.

As far as viral challenges go, this one seems fairly harmless. No, it isn’t raising money to pay for lifesaving research. But at least this time, people aren’t jumping out of moving cars, walking around wearing blindfolds or eating Tide pods.

Just make sure you have enough room for the full spin. And if you’re new to martial arts, make sure the bottle is empty to avoid a mess.