Snapchat takes on TikTok with launch of Lens Challenges 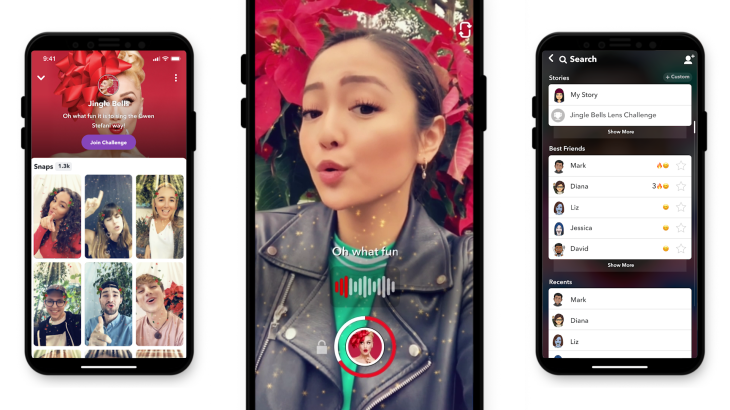 Snapchat is looking to increase user engagement with the app with the launch of a new feature called Lens Challenges. Users can opt to participate in the challenges by creating a snap with a Lens that’s themed to a particular song, dance, holiday, event and more, the company explains.

For example, one of the first challenges to launch is a sing-along with Gwen Stefani’s “Jingle Bells.”

Users access the new challenge from the Lens Explorer section of the app, then lip sync along with the song. When finished, they’ll send the snap to the Gwen Stefani Challenge story for the chance to be featured in the app.

While this particular challenge was designed by the company itself, others will be created by community members. Also new today is one called the “Disappear” challenge, created by Snapchat user Jye Trudinger. In this one, users are prompted to take two photos that superimpose, in order to make the photo’s subject disappear.

Users can also watch others’ Challenge Snaps while in Lens Explorer. But the Challenges don’t have to be public — they also can be privately shared with your friends, if you prefer.

The company hopes that more creators will create challenges going forward, as it will help them to grow their own audience and engage their fans.

The new feature seems to be inspired by TikTok,  the rapidly growing social app where things like song, dance and lip sync challenges are the norm. TikTok has been surging in recent months following Bytedance’s acquisition of Musical.ly, which allowed it to merge the latter’s customer base with its own. That led TikTok to surpass Facebook, Instagram, Snapchat and YouTube in new downloads last month.

Snapchat, meanwhile, has been struggling this past year to recover from a rushed redesign plus declining engagement and revenue per user, among other things. The company in Q3 lost 2 million users, but its user base is still up year-over-year — so there’s a chance for a recovery from some of its missteps.

Snap CEO Evan Spiegel this year laid out the company’s “comeback” plan in a massive internal memo that focused on fixing problems with the design, Discover section, inability to reach older users and more.

Since its launch, Snapchat had seen Facebook steal some of its best ideas for its own, like Stories — which are now one of Instagram’s defining features. Stories have also become something of an industry standard the way Facebook’s News Feed format has — they’re now found everywhere across the social web, from LinkedIn to YouTube. Now Snap is the one borrowing from a buzzy up-and-comer aimed at its tween to teenage customer base. That may not be its worst idea, even if it’s not very original.