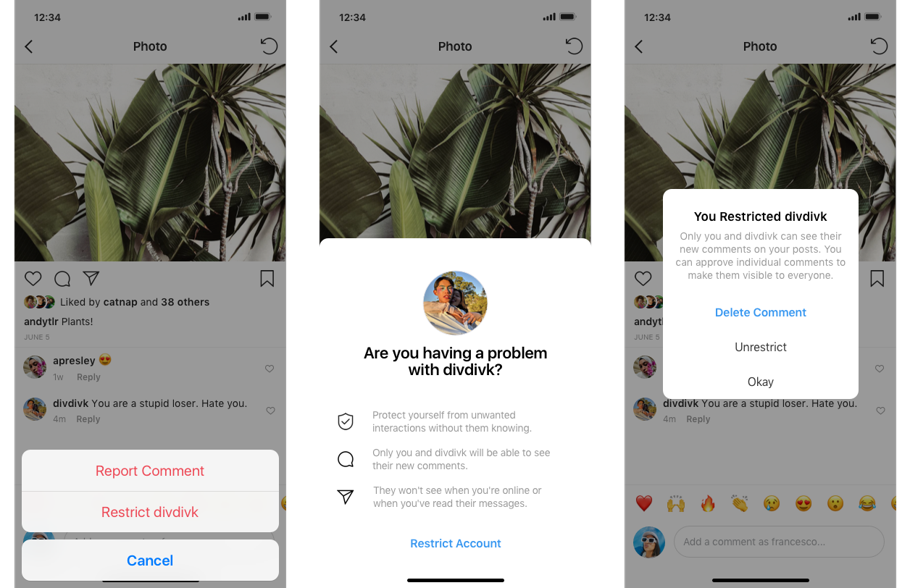 The company announced two new anti-bullying features: a warning when you post negative comments, and the ability to "restrict" certain people from publicly commenting on your posts.

Instagram previously said it was working on the new warning labels during F8 in April. The feature doesn't prevent people from leaving negative comments, but it will nudge the poster to "rethink" what they are saying before posting. "Are you sure you want to post this?" the message says. "We're asking people to rethink comments that seem similar to others that have been reported."

These notices have been cropping up in the app over the last week. Instagram chief Adam Mosseri wrote in a blog post that some early tests of the feature have had positive results. "It encourages some people to undo their comment and share something less hurtful once they have had a chance to reflect," Mosseri wrote, though he didn't provide specifics on how effective the warning labels have been.

Separately, Instagram added a new "restrict" feature that may be more helpful for people dealing with bullying or harassment that's more targeted. Restrict is essentially a middle ground between blocking and doing nothing. The feature is "testing in select countries," according to Instagram, but will be widely available later this year.

When you designate someone as "restricted," their comments are only visible to you and them unless they are approved. But unlike blocking, the person who is restricted won't have any indication that their comments are being screened (unless they have a finsta or some other way to view a post from another account). Anyone who is restricted won't get read receipts when you view their direct messages and won't be able to tell when you're online, according to Instagram.

Mosseri says this is important because blocking a bully can sometimes "escalate" the situation and make things worse or make it difficult for someone who is being bullied to see what's being said about them.

Bullying has long been an issue for the photo-sharing app, particularly as it's grown more and more popular with teens. A 2017 report found bullying was much more prevalent on Instagram than on Facebook, where people are required to use their real names, or on Snapchat, which is geared more toward private conversations.

The company also said it's toying with hiding like counts and an "away mode" that would allow people to take a break from their account.