This is interesting - according to a new discovery by reverse engineering expert Jane Manchun Wong, Instagram is testing out a new process which would categorize your 'Following' list into both topic categories and listings based on your engagement with each, in order to help users better manage what content appears in their main feed.

As you can see in the screenshots above, the option would automatically sort your following list into topics, like 'Art', 'Comics' and 'Travel'. These listings would be based on the information provided by Instagram business pages - but in addition to topics, Instagram has also included lists of 'Least interacted with' and 'Most shown in feed', based on your individual activity.

The latter two are particularly interesting - with 'Least interacted with', Instagram would essentially be recommending profiles to unfollow, as you clearly haven't shown much interest in them. That would then better enable Instagram's algorithm to understand what you want to see on the platform, improving the user experience - but it also seems to go somewhat against the past social media ethos of getting users to follow as many people and profiles as possible, in order to keep their content stream flowing.

Now, with users much more attuned to how social media platforms work, and what they want to see, there's less need to encourage this type of behavior. Twitter actually experimented with something similar last year, with recommendations of who people should stop following in order to improve their Twitter experience. 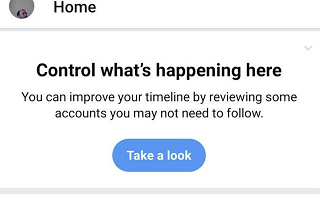 The shift away from content volume, and towards relevance, is actually part of what's fueled Instagram's rise, and seen it become the fastest-growing social platform, now with over a billion active users. With Facebook feeds becoming crowded with updates from extended family, workmates, past school acquaintances, etc., Facebook itself has become less useful as a source of entertainment. The initial social media impetus to 'add everyone' has in some ways hurt Facebook, but with people beginning afresh on Insta, they can curate their feeds more diligently, and ensure that their content stream is actually populated with updates they find entertaining - as opposed to just approving every connection request.

That's also made it harder for some of the social media 'gurus' of the initial wave to build their presence on Instagram - in the past, you could 'follow for follow' your way to a massive audience, but on Insta, it's not as easy.

Given this, initiatives like these are likely to become more common, and will actually help users improve their experience through reduction, as opposed to discovery.

There's no word on whether this test will ever go live, and no word from Twitter either as to the results of its initial tests. But it seems like a positive addition - so long as users are aware of its utility.